Some days I feel like an old shark in a sea of happy dolphins. (Don’t assume too much).

Laura Brown, writing this site (in one form or another) since 2004.

When you think about it, did Disqus kill blog commenting? I stopped commenting on other sites because of Disqus. Having to register for their service and even then most of the time I would have to login with it only to have it not find my account. Far too much trouble when something like Twitter was so much simpler. Now I just leave a note on Twitter, with a link referring to whatever I wanted to comment on. Much easier, less stress, and it works.

By the way, Disqus is now spamming you but you can pay for it to stop. Or just stop using Disqus. People might start commenting on your site again, or not. I think the days of leaving comments on blogs are gone. Too much hassle to deal with software, like Disqus

Found this on Twitter today. It’s a great word for urban exploration, at least for me. I do like the plants growing in odd places: rooftops, cracked cement, and railway tracks as shown in the photograph. Sort of abandoned gardens and yet, most were never planted deliberately. Where have you seen something growing in spite of it’s habitat?

Word of the day: “ruderal” – able to thrive on disturbed or broken ground, or among waste (Latin rudus, rubble). Used esp. of plant species.

I started a Twibe (a Twitter based group) for Ontario Blogging Women. We can talk about anything but the idea is to get together in real time, have coffee, meet real people in real places. You can bring the digital world with you but lets see some faces.
Update – The Twibe is long gone. But, I created a new link via Blogger. If you came here looking for Ontario Blogging Women leave a note.
Are you sure people can find you online? What if you change your Twitter account? What if a web service you rely on shuts down? What if… ? 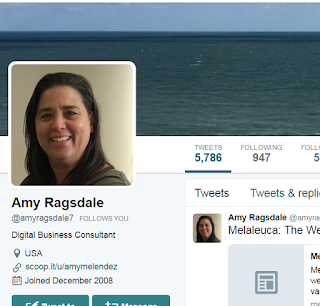 Amy (see images) is my example tonight because I did have to track her down from a broken Twitter link and nothing else but the Scoop.it profile I was already looking at. Google search results were not a big help because her name has changed and the domain for her current name is not the same person. So I searched Google for both names (together) and did find her new Twitter account among the search results. (Turns out I was already following her there).

If you rely on web services, like social media, for your web presence you could be leaving it up to chance.

Not everyone wants to buy a domain and run their own site. It’s another expense, another new thing to learn and another drain your your available time too. But, consider something simple like creating a quick profile on Blogspot. Yes, it is a web service too, so it could disappear but it has been reliable for a very long time.
All you need to do is ceate an account (or use the account you forgot you still had) and set up a blog. You don’t need to post regularly. It’s just a place to have your name, some general information and your links available.  If you can get your name, great. (Example – yourname.blogspot.com) Likely you won’t find it available. So pick something clever for your account – consider your business or niche and go from there.
Next time someone goes looking for you online you have this as a base of operations. It’s not perfect but it’s simple and free.
As an option you can buy a domain and have your Blogspot/ Blogger site on that domain instead of the blogspot.com web address.
Of course, there are other free web hosting services. I like the history of Blogger and the fact that Google currently runs it with few limitations to how you use it. 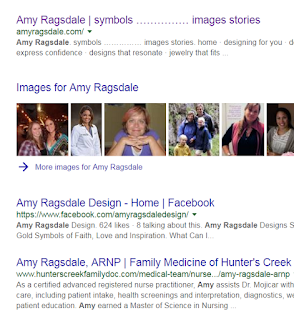 I really dislike logging in or registering with a site in order to leave a comment.

If they don’t collect and sell email addresses and the other information they gather from you… there is still the lovely newsletter they will assume you want sent to your email inbox, regularly. Even if they say they do not sell or give away your information, that doesn’t mean they don’t.

Registering for a site also means, not only do they now have my email address but in their database they also have my standard password, the one I try to use almost everywhere, for every site and online service. Don’t think that sort of information is not being kept track of by someone, somewhere. I am so fed up with registering and logging in for sites I am going to begin deleting my accounts at any site I go to. (Other than those I really do use daily).

The really interesting thing, is how damned hard you have to look to find a way to delete those accounts. In some cases I have to email for help – assuming I can find any contact information. But, never fear, Twitter is here. If you can not get a site to remove you from the database send an aggressive yet polite note to them on Twitter. That way a lot of people will read it and be aware of the problem. You may never hear anything back from the site. I would say I only get any help deleting my account half the time.

The real solution is to be careful and ultra conservative when it comes to registering for anything on any site. Just say NO!

We rely on dead accounts. Dead or dud accounts should be clutter but they aren’t really. Instead they add to our numbers, and we like numbers as statistics we can see and measure. But, they aren’t all that reliable, or honest.

Twitter followers, Facebook friends, mailing list and newsletter subscribers… if you had to audit your subscriber list would you have even a quarter of those subscribers? A quarter was actually being nice. It is far more likely your subscribers and followers would reduce down to a very small fraction of those currently on your list. But, web publishers don’t yet have to face subscriber audits. I worked in the circulation department of a magazine, a print magazine. Audits were a reality there. Print magazines have to verify their subscriber lists, the people on them have to be real and currently getting the magazine. Advertisers really like having that kind of data when they consider spending their money.

So far the web is different, generally.

As a web publisher are you satisfied with that?

Do you care how many of your followers, friends and subscribers are actually real people (and maybe reading your newsletter too)? You don’t have to care. You can just ignore the whole thing. It’s nice to say you have thousands of subscribers rather than audit it down to a handful.

About once a year I take an axe to my Twitter account. I’m not ruthless about it. I leave some accounts which don’t look very active and probably don’t really care what I’m posting, or if I’m posting. But, I do set limits. It’s a Twitter audit where I only have to please myself.

I know I still have a lot of accounts which are dud and dead accounts in some way. But, I leave them because it is nice to have some numbers. I’m not immune to that game.

I don’t run a newsletter because I know just how fast I can build a subscriber base – of bots, spammers and dud accounts. Thanks for nothing. I miss running a newsletter. I had a few over the years online. My best was called InkSplatters, for writers.

If you had to audit your followers and subscribers how would it go? Could you be brave and do it or is it just too nice to go along and pretend all those numbers are real?

Some day you may have to prove them. I don’t think digital media will be left to make claims of thousands of subscribers they don’t really have for much longer. At least not sites which want advertisers to pay them for their space.

I found this on Twitter. The post has been up awhile, there are a lot of answers. Before you look, think of the woman you would add. Mine is posted there (and below here) too.

Yvonne De Carlo – Lily Munster gave horror a woman’s face and humour for me. She comes to mind first.

Just added this to my writing links. How can you not be inspired with romance, drama and things old, mysterious and secretive?

Many blogs have begun using the infinite scroll which means their blog posts go on endlessly, bottomless. It may be good for keeping people reading your site longer, preventing bounces. But… please throw your readers a lifeline – add a link back to the top of your site.

I was reading WP Decoder earlier and sent a note:

With infinite scrolling it would also be nice if people provided a floating link to get back to the top/ start. I wanted to look for your Twitter link after reading far down your bottomless posts. (I was in 2013). Not everyone knows basic things like keyboard shortcuts these days.

A floating link is best because it will stick with people as they read. Plus, it jumps around a bit and tends to get noticed.

Sleeping Beauty Fashions quietly closes the doors as Prince Charming comes out of the closet -opens his own start up.

Cinderella missing since shoe shopping incident. Step-sisters claim she was depressed and off her medication.

Snow White claims it was all a bad apple. Little people still demand compensation for bullying. Queen has no comment. #RealisticDisneyPlots

I posted these to Twitter. They were fun to think up. What spin can you give to a Disney movie?